Passing the Torch was inspired by the arrival of the London 2012 Olympic Torch into Wales, together with the simultaneous visit of the Jugendsinfonieorchester & Oberschwaben Symphonic Brass of Ravensburg, Germany and the 1812 bicentennial.

On Fri 25 May 2012 the Olympic Flame first entered Wales at Monmouth, passing through Abergavenny before then moving on through Blaenau Gwent to Newport and Cardiff.

On Sat 26 May 2012 the torch relay then continued on, departing from the Welsh capital, passing through Pontypridd and Merthyr Tydfil, and then making it's way down through the upper Rhondda Valley passing through Treherbert, Ynyswen and Treorchy before then heading on to Bridgend, Port Talbot, Neath and Swansea, to continue its journey on to West and then North Wales. 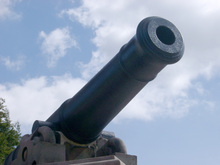 In addition to being the year of the London 2012 Olympic Games, 2012 of course also marked the bicentennial of the Wars of 1812.

To mark both occasions Craig devised and produced a duo of large scale celebratory concerts, hosted at Abergavenny Castle and in Rhondda Cynon Taf. The performances featured domestic performers together with the visiting orchestra and symphonic brass enemble from Germany.


The events were a great success, fully capturing the spirit of celebration, collaboration and spectacle that are the hallmarks of the Olympic Games.