The World Military Music Festival in Tripoli, Libya, took place in the Libyan capital of Tripoli in September 2009 on the occasion of the 40th anniversary of the Libyan People’s Arab Jamahiriya. 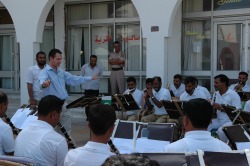 The Festival proved to be a great coming together of different peoples from different nations, with an air of friendliness and unfettered cooperation from all parties pervading throughout the rehearsal and performance process. Lasting friendships were made as a result of the event and a superb impression of each nation involved was left with all performers, production staff, and even more so with the audiences of thousands that were present at the performances and dress rehearsals 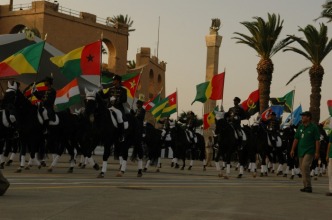 The massed bands of the World Military Music Festival performed before the then Libyan Leader, Colonel Muammar al-Gaddafi, Leaders of the nations of the African Union, and other VIP guests, and also accompanied a flypast and parade of troops from all member states of the African Union and troops of the Libyan forces through Green Square. 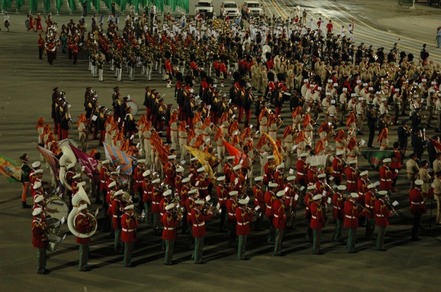 Each individual band / performance group undertook their own short performance before being brought together for a huge and colourful massed international finale. The performance took place in Green Square, in front of a seated audience of invited guests, senior military figures and thousands of members of an incredibly appreciative general public. 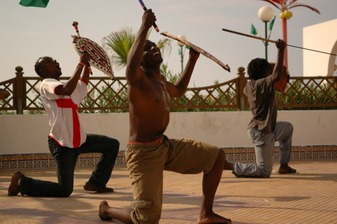 The bands present at the Festival from the UK, Mexico, Algeria and Pakistan, along with Pipes & Drums from New Zealand and the Kenyan Dancers came together to give an additional impromptu street performance for the Libyan people in Green Square. Thousands of members of a very appreciative general public were in attendance

Malta - Band of the Armed Forces of Malta


Algerian or Austrian; French, Russian, British, Libyan, whichever nationality; each and every person involved with, or who was witness to, the World Military Music Festival in Tripoli, came away with incredibly positive and lasting good impressions of every nation that was involved. These impressions, and the friendships made there will remain with them for the rest of their lives. 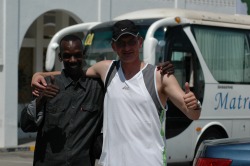 A demonstration video of the World Military Music Festival can now be found online via the links below: