The Red Lady of Paviland - Background 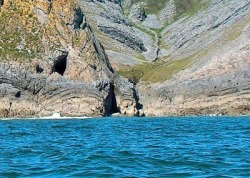 The Red Lady of Paviland is an ancient human skeleton, discovered in 1823 by Rev. William Buckland, in one of the Paviland limestone caves of the Gower Peninsula in South Wales. The Red Lady is so named because the very bones of its skeleton are completely coloured a deep red.

In his book Reliquiae Diluvianae (Evidence of the Flood) also written in 1823, the Rev. Buckland wrote about his discovery:

"[I found the skeleton] enveloped by a coating of a kind of ruddle ... which stained the earth, and in some parts extended itself to the distance of about half an inch [12 mm] around the surface of the bones ... Close to that part of the thigh bone where the pocket is usually worn surrounded also by ruddle [were] about two handfuls of the Nerita littoralis [periwinkle shells]. At another part of the skeleton, viz in contact with the ribs [were] forty or fifty fragments of ivory rods [also] some small fragments of rings made of the same ivory and found with the rods ... Both rods and rings, as well as the Nerite shells, were stained superficially with red, and lay in the same red substance that enveloped the bones."

As a creationist, Rev. Buckland believed no human remains could have been older than the Great Biblical Flood, and thus unfortunately he underestimated the skeleton’s true age. He believed the remains to date back to the Roman era. The Reverend also believed the skeleton to be female, due in large part to the numerous decorative items (the perforated seashell necklaces, ivory wands and jewellery described above) discovered with it. These items, combined with the skeleton's red colouration, caused Buckland to further speculate that the remains may have belonged to a Roman prostitute or witch.

The good Reverend Buckland was however slightly misled by his beliefs and findings. The Red "Lady" has in fact now been identified as a red man, a man probably no older than 21 when he died, and his are in fact the oldest anatomically modern human remains found in the United Kingdom. His burial is also the oldest known ceremonial burial in Western Europe. Scholars now believe he may have been a tribal chieftain.

Tests made in the 20th century suggested he lived about 26,000 years ago (26,350 ± 550 BP, OxA-1815) at the end of the Upper Paleolithic Period: however, a more recent examination of the remains by Dr Thomas Higham of Oxford University and Dr Roger Jacobi of the British Museum suggests they may even be 4000 years older. That figure would make the Red Lady older than Stonehenge by more than 20, 000 years. 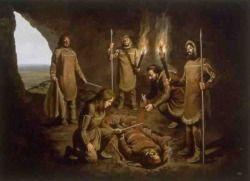 Although now on the coast, at the time of the burial the cave would have been located approximately 70 miles inland, overlooking a plain. When the remains were dated to some 26,000 years ago it was thought the Red Lady lived at a time when an ice sheet of the most recent glacial period (in Britain known as the Devensian Glacation) would have been advancing towards the site, and that consequently the weather would have been more like that of present day Siberia, with maximum temperatures of perhaps 10°C in summer, -20° in winter, with a tundra vegetation around. The newest dating however indicates he lived at a warmer period.

Boneprotein analysis indicates that the "lady" lived on a diet that consisted of between 15% and 20% fish, which, together with the distance from the sea, suggests that the people may have been semi-nomadic, or that the tribe transported the body from a coastal region for burial. Other food probably included mammoth, the wooly rhinoceros and deer - the Lady’s skeleton was in fact found along with a mammoth’s skull, which unfortunately has subsequently been lost.

Subsequent excavations of the area in which the skeleton was found have yielded more than 4,000 flints, teeth and bones, and needles and bracelets, which are on exhibit at Swansea Muesum and the National Museum in Cardiff. When the skeleton was first found however, Wales had no museum in which to keep it; instead, it was housed at Oxford University, where Buckland was a professor. Requests have been made to bring the Red Lady itself back to Wales but to date, despite being loaned to the National Museum in 2007, it still resides today in Oxford.