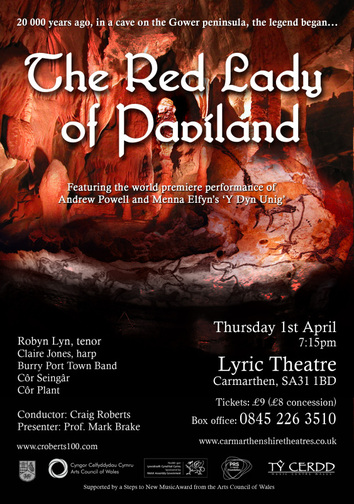 Drawn from a cave on the Gower Peninsula, the 20 000 year old ochre-stained bones of the Red Lady of Paviland provide the inspiration for this unique and imaginative bi-lingual presentation of Welsh music, history, mythology and scientific fact.

Centred around the fascinating story of the Red Lady of Paviland, the centrepiece of the project was the work ‘Y Dyn Unig’, an evocative cantata by Andrew Powell and Menna Elfyn, commissioned by Craig and the Burry Port Town Band, supported by a Steps to New Music award from the Arts Council of Wales.

Following the premiere in 2010, the story of the Red Lady, and work connected with the project, continued with the work of iScience in the 2011 Valleys Discovery Festival event 'In These Bones Horizons Sing'. In December 2011 the 'Hwiangerdd' (central element of 'Y Dyn Unig') was then recorded by the Philharmonia Orchestra and Welsh soprano Elin Manahan Thomas at Abbey Road Studios, for release in the summer of 2012.

Work is now being undertaken to adapt the Red Lady as the centrepiece of a new education project for schools and voluntary music groups for 2014/15 by Making Music, Ty Cerdd, the University of Glamorgan and Swansea Museum.