Brass instruments have existed almost as long as music itself. Some of the earliest examples date back to Ancient Greece and Roman times. During the Renaissance, brass then began to develop to resemble the modern instruments now in use today.

Brass has proven incredibly versatile, with a wealth of music especially written for the genre, ranging from Giovanni Gabrieli's Sonata pian' e forte of 1597 through to the large works for brass band of modern day.

Throughout it's history, brass has collaborated and been combined with a wide assembly of other musical forms. From inclusion in the modern symphony orchestra to collaborations with an array of varied styles, brass has been featured in music as diverse as traditional celtic, contemporary electronic and even acid house.

Despite the obvious literal connotation, one genre brass has never collaborated with however is heavy metal

The pioneering work of Led Zeppelin, Black Sabbath and Deep Purple was followed by the large scale more populist shows of Alice Cooper and Kiss; the blues-rooted rock of Aerosmith; the flashy guitar leads and wild party rock of Van Halen, and other household names including Iron Maiden and Def Leppard followed.
​
Glam metal bands such as Bon Jovi and Mötley Crüe followed before underground scenes produced an array of more aggressive styles: thrash metal broke into the mainstream with bands such as Metallica, Slayer and Megadeth, while other subgenres such as death metal and black metal remain subcultural phenomena.

​We Are Many, We Are Legion 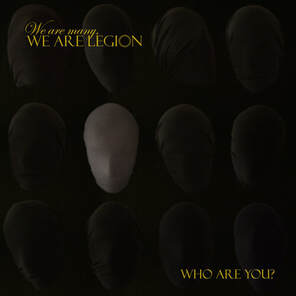 We Are Many We Are Legion is the vision of writer and overseer Paul Kirk.

Kirk's vision is the fusion of metal music with a six piece brass section, combining the dark rasp of New Orleans style brass with the aggressiveness of metal's electric guitars and harsh vocals, both resolving into powerful soaring choruses.

Kirk describes Legion's message as one of inclusion, togetherness and family. In an ever-fracturing world, by merging the worlds of brass and metal, Kirk's vision is that their their combined sound stands as a metaphor for what can be achieved when the constraints and stereotypes we are led to believe cannot be undone are ignored. Kirk seeks to create music that is greater than the sum of its parts and to inspire those who feel alone, without a voice and lost to come together.

"We all struggle, we all have demons, but when we come together we can achieve great things. Together we can make our voice heard, together we can lift each other up and create a community that supports and cares for one another. Though the music of Legion is deeply personal, it explores issues which affect us all and maybe, just maybe, knowing that someone else feels your pain can provide a level of catharsis.

“On a simple level, we create heavy music with a unique orchestration to listen to. On a more cerebral level we are a rallying point. A concept, an idea that it doesn’t matter who or what you are, you are not alone, you can collaborate and co-exist, you can be anything you want and with others who feel the same surrounding and supporting you the possibilities for hope are endless”

Metal music charts have been performed on brass previously. Bands such as Dutch New Orleans style ensemble Heavy Hoempa (literally "Heavy Buskers") have performed covers of well known tracks to wide live and online acclaim. We Are Legion however would be a true fusion of new original music for metal and brass.