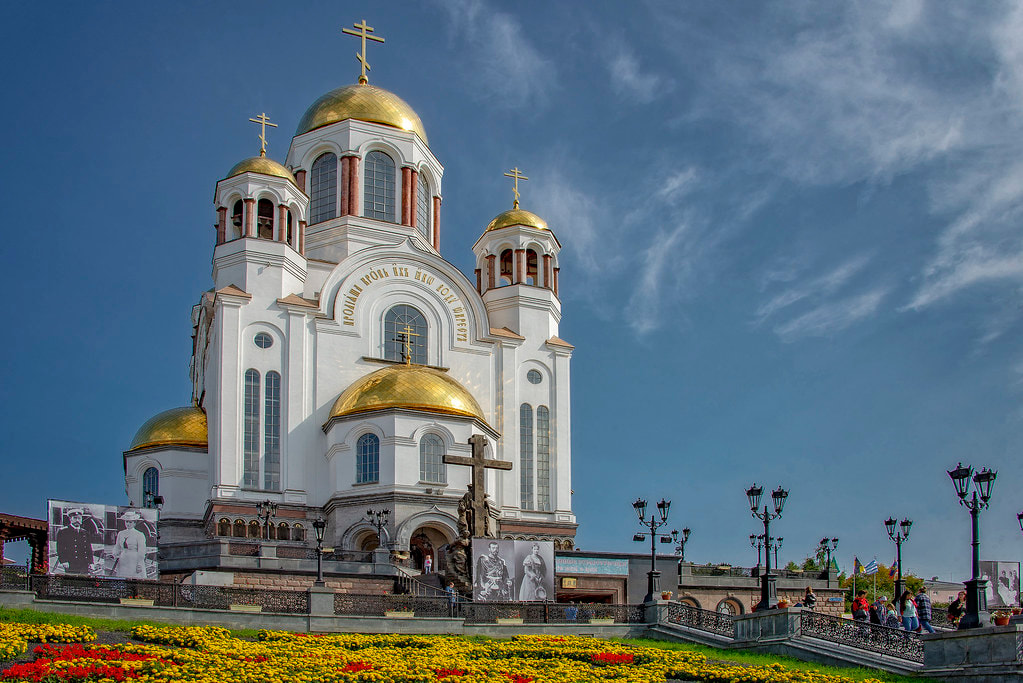 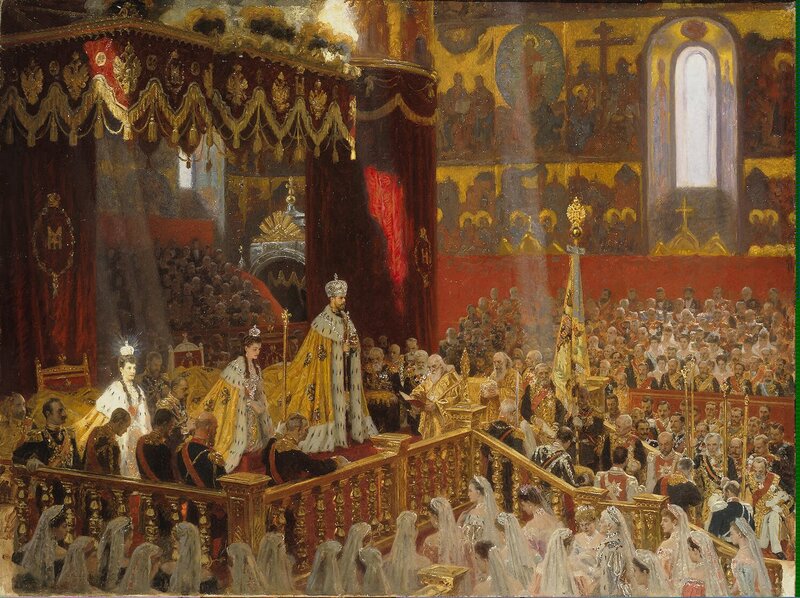 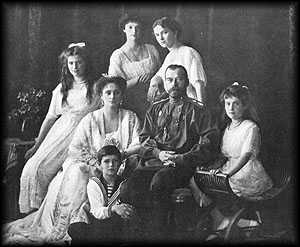 ​Act I
​
The work opens in Yekaterinburg 1977, where an image of Ipatiev House is displayed on a video wall. Underpinned by dark music, verbal instructions from the politburo to the local party Chair are relayed that the house, now a place of pilgrimage for those wishing to honour the Imperial family, must be destroyed. The Chair acknowledges ("They know not what they do..."). The destruction of the house is seen, save for one wooden cross. The screen focuses in on that cross, which pulsates and becomes the central image of film of the grand coronation of Nicholas II, at the Cathedral of the Assumption in the Moscow Kremlin. To music of Mussorgsky's "Coronation Scene" from Boris Godunov, images of the Throne Room of the Kremlin are displayed, together with overhead drone footage of the Cathedral Square, the Kremlin and the glory of Moscow and St Petersburg are revealed.

The film segues to a live scene inside the Winter Palace, where Tsar Nicholas reflects on his appointment as Tsar, the glory of his predecessors and his commitment to Russia ("Appointed by God"). The Tsarina joins him in song, reflecting on the coronation, her love and support for Nicholas and for Russia, and also - in a hint at the troubles of the time - on the tragedy of Khodynka. Time passes and the births of the Romanov children are reflected [Olga (1895) - Tatiana (1897) - Maria (1899) - Anastasia (1901) - Tsarevich Alexey (1904)]. The Tsarina offers thanks to God for their family, and the Tsar for his heir ("Thanks Be To God").

The Tsarevich' illness is revealed ("The English Disease - The Royal Disease - The Secret"). The Tsarina appeals to God for help ("Help Us O God"), which links to arrival in Petrograd of Rasputin ("Thanks Be To God, reprise").

The scene cuts to the city, where gossip abounds among Society Ladies of Rasputin and his "Holy of Holies", which links into Rasputin depicted in a debauched tavern scene ("Sin to be Saved"). Also depicted, in a response to the tavern scene, is Felix Yusupov, who expresses his disgust and hatred for both Rasputin and his actions to a non-descript confidant, who is later revealed to be his friend from university, and now British SIS agent, Oswald Rayner. The discourse and interplay between Rasputin and Yusupov build toward confrontation and collision, when a messenger interrupts the scene with an urgent telegram from the Royal Palace: the Tsarevich has suffered a potentially fatal accident. Rasputin immediately drops to his knees to offer prayer and a response ("God has seen your tears and heard your prayers") then departs to tend to Alexey and the distraught family, leaving Yusupov in fury.

At the Winter Palace, the Tsarina receives Rasputin's telegram / prayer at the Tsarevich' bedside. She sings of hope, her children ("You Who I Cradled In My Arms") and thanks for Rasputin ("Sent By God"). The boy awakes, just as Rasputin arrives. The Tsarina reaches out to hug the mystic in thanks, and the embrace is witnessed and misinterpreted by a servant. The rumours ensue...

The action cuts to 1913, where Tsar Nicholas is attending the wedding of the Kaiser's daughter together with George V in Berlin. "Willy, Nicky & George" are seen together for the first time ("Three Wise Men / We Three Kings"). Meanwhile, at home in Russia, dissent is growing. Yusupov hears of the embrace between Tsarina and Rasputin and is incensed. Rasputin is denounced by the Church and Duma, and rumours grow among the population ("Rasputin Must Go"). Following the recovery of the Tsarevich after Rasputin's intervention however, the reverse is depicted by the Romanovs ("Rasputin Must Stay" - "The Secret, reprise" - "Untouchable, If Only They Could See Him As We Do [all cast about Rasputin from opposite points of view])"

The interplay between the two sides again builds toward collision / confrontation, when there is once again a sudden interruption - Archduke Franz Ferdinand has been assassinated by a Bosnian Serb nationalist in Sarajevo. The First World War is upon us...

Act II opens with the news in Petrograd that the First World War is underway ("War Is Upon Us). Sergei Sasonov advises the Tsar of the "Austro-German conspiracy to end Russian influence in the Balkans, and discourse is depicted between the Tsar, Kaiser and King ("Three Wise Men We Three Kings" reprise - "What would Queen Victoria say?").

The Tsar and Tsarina reflect on their feelings of the opening ("Appointed by God" reprise, as the Tsar reflects on loyalty to family, his fellow Slavs in Serbia, and to the Russia his son will inherit - "The Secret"). The Tsar departs for the Front Line, leaving the Tsarina to act as de-facto Regent, with Rasputin as Counsel ("Thanks Be To God", reprise for Father Grigori - "The Secret", reprise)

Purishkevich' Speech to the Duma is heard: ​"The Tsar's ministers who have been turned into marionettes, marionettes whose threads have been taken firmly in hand by Rasputin and the Empress Alexandra Fyodorovna—the evil genius of Russia and the Tsarina... who has remained a German on the Russian throne and alien to the country and its people. An obscure moujik shall govern Russia no longer! While Rasputin is alive, we cannot win" and the response of the company and nation is reflected  ("Our German Queen / Rasputin Must Go")
​
At the Moika Palace, Yusupov confides once more in Rayner. He outlines his discussions with Purishkevich following the speech, and discusses the plan to assassinate Rasputin ("Rasputin Will Go - The Secret, reprise").

At the Winter Palace, correspondence between the Tsar, Tsarina and Rasputin is outlined ("An Invaluable Service [by all three]"). Rasputin reveals to the Tsar the premonition of his own death ("The Premonition")

The Moika Palace and the night of the assassination are upon as. Yusupov greets Rasputin, pleasantries are exchanged, and cakes are offered and refused. Yusupov's frustration and panic is evident, and he excuses himself to seek offstage advice from his co-conspirators. Yusupov returns and the discussion resumes, wine is offered but no reaction. Yusupov again seeks offstage advice and Rasputin's suspicion builds (Rasputin: "You Know Not What You Do"). Yusupov returns with a gun, but cannot bring himself to use it. Rasputin mocks and threatens to expose him. In a loss of temper, Yusupov fires the shot. Rasputin is dead - or is he?

Yusupov crows to Purishkevich, they return and Rasputin is on his feet again. The mystic states he will tell all to the Tsarina and flees. Purishkevich and Yusupov are held in a stage right spotlight, with Yusupov cowering and Purishkevich reaching for his own gun. Rasputin is captured in a stage left spotlight, fleeing his would be assassins. Purishkevich fires into the dark, a first shot which misses, then a second which hits Rasputin in the back. He staggers on however, and with Purishkevich' gun at his side, and both conspirators looking on, a third shot offstage shot is heard and Rasputin falls backward toward them. The stage goes to black.

The sounds of rumour and confusion are heard, panic and violence from Yusupov, questions from Purishkevich, advice from Rayner. The stage is lit, where interviewers take the accounts of Yusupov and Purishkevich ("The Fiction of Yusupov")
in separate vignettes similar, to the earlier discourse of the Emperors. The anomalies between the accounts are revealed however, and - in the third spotlight where Rasputin fell - the results of the autopsy are announced ("The Treason of Yusupov"). Rasputin is seen fleeing, the shots of Purishkevich are repeated and this time Rayner steps out from the dark and fires the final, fatal shot point blank into Rasputin's forehead ("Rayner Revealed"). Yusupov "confesses all" including the posthumous beatings and disposal of the body.

New Scene. The consequences of Rasputin's assassination and the conspirators' actions are outlined: winter and hunger, strikes, the revolution and abdication ("The Legacy of Yusupov"). The Tsar is depicted alone on stage, where he laments the passing of Rasputin (“a good, simple, religious Russian man. In minutes of doubt and spiritual turmoil, I loved to converse with him and after such conversations my soul is always light and calm.”) and the end of three centuries of Romanov Rule ("Tsar's Soliloquy - the Twilight of Imperial Russia / The End of Days" - "They Know Not What They Do").

At the instruction of their captors, Tsar Nicholas is joined on stage by his family. They are informed that their planned exile to the UK has been refused, and also exile to France ("They Know Not What They Do"). The Romanovs are removed of their trappings, the music diminishes as the light fades ("They know not what they do"). Silence and darkness ensues...

Epilogue. The video wall depicts a reflection on the scenes that have been witnessed. A visual review of the strength of Russia through the ages and modern resurrection as the Russian Federation is revealed

​The above then links to video of the Romanov funeral on 17th July 1998, and the speech of Boris Yeltsin. During the speech, the Romanovs return to the stage, canonised. They are joined, on the fringes, by Rasputin and other cast - including, finally and focally, Yusupov, Purishkevich and Rayner.

This is a historic day for Russia. Eighty years have passed since the slaying of the last Russian emperor and his family. We have long been silent about this monstrous crime. We must say the truth: the Yekaterinburg massacre is one of the most shameful episodes in our history.

By burying the remains of innocent victims, we want to atone for the sins of our ancestors. Those who committed this crime are as guilty as are those who approved of it for decades. We are all guilty.

It is impossible to lie to ourselves by justifying senseless cruelty on political grounds. The shooting of the Romanov family is a result of an uncompromising split in Russian society into ''us'' and ''them.'' The results of this split can be seen even now.

The burial of the remains of Yekaterinburg is, first of all, an act of human justice. It's a symbol of unity of the nation, an atonement of common guilt. We all bear responsibility for the historical memory of the nation. And that's why I could not fail to come here. I must be here as both an individual and the President.

I bow my head before the victims of the merciless slaying.

While building a new Russia, we must rely on its historical experience.

Many glorious pages of Russian history were connected with the Romanovs. But with this name is connected one of the most bitter lessons: Any attempts to change life by violence is condemned to failure.

We must end the century, which has been an age of blood and violence in Russia, with repentance and peace, regardless of political views, ethnic or religious belonging.

​This is our historic chance. On the eve of the third millennium, we must do it for the sake of our generation and those to follow. Let's remember those innocent victims who have fallen to hatred and violence. May they rest in peace.

Music crescendos beneath the close of the speech and builds to a big finish. The curtain drops and the house goes to black.