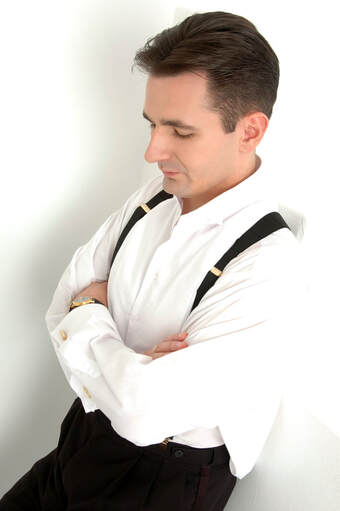 Craig studied at the United Kingdom's University of Salford, gaining first his BA (Hons) then Masters degree there, studying with Dr Roy Newsome, Dr Peter Graham and Prof David King. Whilst at the university, Craig was awarded the Roy Newsome conducting prize as the outstanding undergraduate conductor of the academic year 2000

Craig has worked on a wide variety of large scale and innovative concert projects both at home and abroad, ranging from the closing event of the London 2012 Olympic Park through a wide variety of major international performances and festivals. He has worked with some of the world's leading performers, including the Stadtorchester, Kreisverband & Jugendblasorchester Ravensburg, Stadtkapelle Nurtingen and Musikkapelle Thanheim of Germany; the Don Cossack, Russian Cossack, Nalmes and Russian State Ballet Companies; Errollyn Wallen and the Welsh National Opera Company; Joji Hirota & the Japanese Taiko Drummers; Tim A. Duncan & the Russian Imperial Ice Stars; and more. ​Through his work with the Welsh Proms, Craig also worked on and managed events featuring the Royal Philharmonic Orchestra, Royal Liverpool Philharmonic, the Philharmonia, Bournemouth Symphony, BBC National Orchestra of Wales and Welsh National Opera Orchestra. In 2014, he also worked on production of the Dylan Thomas Centenary Gala held at the Queen Elizabeth Hall, Southbank, which featured Griff Rhys Jones, Hugh Bonneville, Tom Hollander, Sian Phillips, Jonathan Pryce, Owen Teale, Owain Arwel Hughes and Camerata Wales

Throughout his career, Craig has directed a wide variety of leading bands and choirs in performance, including the Black Dyke, Brighouse & Rastrick and Leyland brass bands; a wealth of international military bands, including the Band of Her Majesty’s Grenadier Guards; and numerous choirs ranging from Only Men Aloud to the Yurlov Russian State Academic Chorus. Within Wales, Craig has conducted the majority of the top brass bands, including the world number one brass band, Cory, who Craig guest conducted for the Golden Jubilee procession through London of Her Majesty Queen Elizabeth II. He has also been successful in musical competition at the highest level, winning the Welsh League Championship on three occasions (2006, 2009 and 2011) with three different bands, and has won every contest in the Welsh League at championship level. In 2004, Craig was named Conductor of the Year by the SEWBBA and WWBBA

For a number of years, Craig was Director of Music of the Woods Mfg Co Brass Band based in Stittsville, Ontario, Canada, and directed the band at several of the world’s largest military festivals, including the Royal Nova Scotia International Tattoo in Halifax, Canada; the Virginia International Tattoo in Norfolk, USA; the Netherlands Nationale Taptoe in Breda, Holland, and the Polizei Show of Hamburg, Germany. Craig later became Assistant Director of the Royal Nova Scotia International Tattoo, working with the world’s largest annual indoor show for a period of 20 years, until resigning his position in June 2018

Craig has worked as Production Consultant to a wide range of large scale international events, including the Canadian Beating Retreat “Fortissimo”, held annually on Parliament Hill, Ottawa, Ontario (2007-10), and the Kremlin Zoria Festival, the first Tattoo to be held in Moscow's Red Square, Russia (2007). He was also Director of Music and Production Consultant for the World Military Music Festival held in Green Square, Tripoli, Libya in celebration of the 40th anniversary of the Libyan Arab Jamahereya and 10th anniversary of the African Union (2009), a show which featured over 1000 performers from 18 different nations, was televised internationally, and attended by over 200 international heads of state

Craig also acted as Director of Music and Production Consultant for the Mediterranean International Festival of Arts and International Tattoo held in Crete, Greece (2010 & 2011), and in 2013 visited Kharkiv, Ukraine to undertake a major parade and performances in the presence of the Ukrainian President Viktor Yanukovych, marking the 70th anniversary of the liberation of the region from Nazi occupation in 1943

In 2015, Craig tour-managed and featured as narrator in the Grimethorpe Colliery Band's 10 date nationwide concert tour of Australia. In 2017 and 2019, he then returned to Russia to work on the famed May 9th Immortal Regiment Parade in Red Square, Moscow. The parade consisted of over a million people in Moscow alone, with over 2 million people participating nationwide. In addition to Moscow, Craig has also travelled to Krasnodar and the Crimean Peninsula in 2018/19, and will return to Russia again in 2021. Since 2018 he has acted as a Consultant | Advisor to the Musikfest Der Bundeswehr in Dusseldorf, Germany and the Internationale Taptoe Belgie in Ostand & Lommel, Belgium. In September 2020, Craig also took up the post of Principal Director of Music to the Estes Park Tattoo in Colorado, USA, and will make his debut at the newly branded Estes Park International Tattoo in 2021

Craig has been the recipient of a number of awards and honours including the Mayor of Rhondda Cynon Taf's Good Citizen Award for Artistic Achievement, which he was presented with for services to music, the arts, education and charitable causes in May 2018. In August 2018, he was then awarded the Talent & Vocation Medal as a Worldwide Charitable Alliance Peacemaker by the International Coordination Council for the Development and Promotion of the Ideas of Peace in a ceremony at the iconic Vorontsov Palace in Alupka. In May 2019, Craig accepted a second award from the Mayor of Rhondda Cynon Taf, in his capacity as Director, for the pioneering work of the Rhondda Arts Festival (RAFT). He was also awarded the Grand Order of Al Fateh, First Class in September 2009 for his work as Director of Music of the World Military Music Festival

Craig has formerly held the positions of Artistic Director to the Welsh Brass Arts Festival, Wales Development Manager to Making Music (the national support body for UK voluntary music), Executive Officer of the UK National School Band Association (NSBA) and General Manager of Wales' national classical music festival, the Welsh Proms Cymru. In November 2018, Craig took up the post of Director with the Rhondda Arts Festival (RAFT), where he has since worked with artists such as Sir Tony Robinson, Omid Djalili, Kerry Ellis and more. In August 2021, Craig then also took up the position of Business Development & Marketing Officer to St Elvan's, Cynon Valley, a remarkable new venue featuring an exhibition space, performance venue, cafe space and church. which will open in Autumn 2021

Formerly a longstanding member of the Executive Council of Music Centre Wales, Ty Cerdd, and the Board of Directors at Community Music Wales, Craig is also currently Vice Chair of Rhondda Cynon Taf International Twinning, a member of the Board of Directors of Sound Affairs, a Trustee of the Grimethorpe Colliery Band and holds the post of Musical Director with both Lewis Merthyr Band, City of Bristol Brass Band and ​Symphonic Brass Wales. He remains a leading freelance arts management and funding consultant, working with a variety of leading artistic projects both home and abroad