Below can be found a list of instrumental groups that Craig has had the pleasure of collaborating and working with over the years. 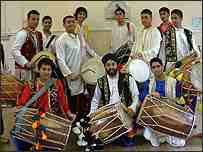 Azaad Dhol Group was created following the earlier success of the Punjabi pop band 'Azaad'. Harjit Singh, founder of the group, was a professional drummer for the acclaimed pop band.  After Azaad split in the early 1990's Harjit decided to share his musical talent through teaching.  He therefore carried on the band's name, meaning 'freedom', by forming the Azaad Dhol Group.

Today the Azaad Dhol Group are a professional outfit who combine education and performance in order to keep traditional Punjabi Folk Music alive and kicking. The group have performed at events throughout the UK and include prestigious venue's such as The Royal Albert Hall & NEC.

Craig first worked with Azaad on the NSBA Festival at Sandwell in 2006, and then again in Wales through the  2007 World Dances project. Further information on Azaad can be found at their website www.azaaddholgroup.com 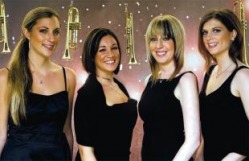 Bella Tromba are an all-female trumpet quartet founded in 2004. The four founding members all studied at the Royal Academy of Music in London.

A unique and innovative ensemble, their dynamic performances and charismatic personalities have won them a place as Park Lane Group Young Artists and fellows of Yehudi Menuhin’s Live Music Now Scheme. Cheltenham Music Festival, South Bank’s Purcell Room and BBC Radio 3’s “In Tune” have all featured the group.

As a female trumpet quartet Bella Tromba is unique within the music industry, and their innovative approach has attracted media attention with articles in Classical Music, Brass Herald and Muso. The members of Bella Tromba have also performed with many of the countries leading orchestras, including the Halle, Britten Sinfonia, the London Philharmonic Orchestra, and the London Mozart Players.

The Guardian described Bella Tromba as “a glamorous all-trumpet girl band, dedicated to exploring and expanding the instrument’s potential”. Through the SPNM, Ralph Vaughn William’s Trust and the Britten Pears Foundation they have commissioned many new works for trumpet quartet.

Craig worked with the group in 2006 when they were guest artists at that year's Welsh Brass Arts Festival. Further information on Bella Tromba can be found at www.bellatromba.com 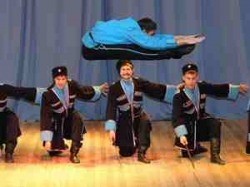 Widely acknowledged as Russia’s premier Cossack dance troupe, the company of 40 dancers, musicians and singers provide a dynamic production which keeps theatre-goers entertained through amazing feats of highly-skilled, acrobatic Cossack dance. Love, dedication and enthusiasm for their unique cultural heritage is the driving force for the company members who, dressed in spectacular costumes, perform a programme of music and dance that portrays all the boisterous courage of the Cossacks through a kaleidoscope of sound and movement, retelling tales of battle, glory, love and betrayal through inspired dancing and thundering rhythms.

The Cossacks of Russia were legendary horsemen and warriors, but it was really through their music and dance that they unleashed their relentless energy and passion for life and freedom. The Cossacks’ faith is a Pravoslavny one and they see themselves as its protectors. Though there are some differences in traditions and customs, the Don Cossacks speak the Russian language and have always considered themselves part of greater Russia, though rather autonomous.

The Don Cossacks have a tradition of choral singing and many of their songs, such as Chyorny Voron (Black Raven) and Lyubo, Bratsi, Lyubo (It’s good, brothers, good) became popular throughout the rest of Russia. Many of the songs, unsurprisingly are about death in war.

Renowned for their strength and athleticism, The Don Cossacks dance with vigour, sparkle and spontaneity, but behind each performance lies many hours of strenuous rehearsals and strong self-discipline, all under the watchful eye of their artistic director, Victor Preobrazhensky.

Having completed tours of Italy, Germany, France, Japan and the USA, Craig worked with the Don Cossacks  on their first UK tour in the autumn of 2008. 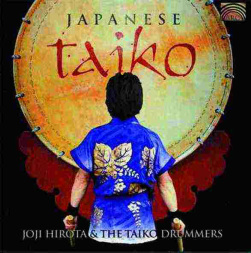 Joji (also featured in the soloists section of this site) has been performing Taiko since the 70s. Joji's greatest influence is his training with the group Hokkai Daiko, led by the great Taiko master ltto Ohba, based in Noboribetsu, Hokkaido. (Taiko/Daiko is a Japanese word for drums.) He was very impressed by their music and found it to be the spiritual centre of his drumming. Ohba gave Joji permission to use the name 'Hokkai Daiko' to describe his drumming.

Since the 90s other Taiko drummers started playing and Taiko groups were established in the UK. Joji also plays Taiko music with other taiko drummers as "Joji Hirota and the Taiko Drummers". Concert programmes also include Joji's performances of shakuhachi flute and vocals of Japanese folk songs arranged by him.

Craig worked with Joji and the Taiko Drummers on the 2007 project World Dances, further information on which can be found in the projects section of this site

The sensational Russian Cossack State Dance Company are widely acknowledged as Russia's premiere Cossack dance troupe. This world-class company of 40 dancers, musicians and singers brings with it a dynamic and breathtaking production, that both dazzles and delights theatregoers through amazing feats of highly skilled, acrobatic Cossack dance.

Love, dedication and enthusiasm for their unique cultural heritage is the driving force behind this exhilarating company who, dressed in spectacular costumes, performs an exciting two-hour programme of music and dance that portrays all the boisterous courage of the Cossacks, through a kaleidoscope of sound and movement. They retell tales of battle, glory, love and betrayal through inspired dancing and thundering rhythms. The Cossacks of Russia were legendary horsemen and warriors, but it was really through their music and dance that they unleashed their relentless energy and passion for life and freedom.

Renowned for their strength and athleticism, the Russian Cossack State Dance Company dance with vigour, sparkle and spontaneity, but behind each performance lies many hours of strenuous rehearsals and strong self-discipline, all under the watchful eye of their Artistic Director, Leonid Milovanov. It is the dedication to professionalism in performance, and to perfectionism in costume, music, in fact every detail, that has brought the company their continued success and international acclaim.

Unrivalled in their field, the Russian Cossack State Dance Company captivate audiences with the ultimate in folklore presentation. Theirs is a truly remarkable performance, rich in energy, passion and excitement, that will leave lasting memories of a truly remarkable evening's entertainment.

Appearances by the company in the UK include the Edinburgh Festival and Military Tattoo in August 2001, and a season for Sadlers Wells in London during February/March 2002, as well as a performance televised by the BBC.

Craig first worked together with the Cossacks and Vitaly Mironov in Canada at the Royal Nova Scotia International Tattoo, and was then responsible for welcoming, and performing together with, the Cossacks in South Wales in 2006.

In April 2005 Craig was approached by the Stadtorchester Ravensburg to assess the level of interest of developing a twinning link with the sixty strong German wind orchestra. In June of that year Stadtorchester Direktor Harald Hepner visited Rhondda Cynon Taf and that year’s Welsh Brass Arts Festival, to meet with Craig and finalise whether a twinning link could be formed.

The Stadtorchester’s invitation was duly accepted and in December of that year Craig flew to Ravensburg to work with the Stadtorchester and direct them in concert, alongside Harald. The performance at the Ravensburg Konzerthaus included performances of Gustav Holst's Moorside Suite and Percy Grainger's beautiful Irish Tune from County Derry.

A return visit was made in April 2006 with Herr Hepner returning to Rhondda Cynon Taf at Craig’s invitation to work alongside Craig with the Parc & Dare Band and the Treorchy Male Choir. In 2006 the now firmly established link with the Stadtorchester Ravensburg became the focal point of the 2006 Welsh Brass Arts Festival, and the entire orchestra travelled from Germany to Wales to perform in the event, in a concert entitled Big Anthem Fawr. The concert was a celebration of the 150th anniversary of the Welsh National Anthem "Mae Hen Wlad Fy Nhadau", the anthem being composed in Rhondda Cynon Taf by Pontypridd's Evan James and James James in 1856.

In addition to a new arrangement, by Craig, of the Welsh National Anthem, the programme also featured music by Mozart, Monteverdi and first performances by a combined wind and brass orchestra of Edward Gregson's "The Sword & The Crown" and the Third Symphony of American composer James Barnes.

Following the visit of the Stadtorchester to Wales in 2006 Craig then travelled again to Ravensburg with a ten piece brass ensemble in December 2007 which performed under Craig's direction in the orchestra's annual Festliche Konzert. He has returned to Ravensburg on numerous occasions with a number of different ensembles since and the musical twinning links between Ravensburg and Rhondda Cynon Taf remain strong to this day.

Further information on the Stadtorchester can be found on the orchestra’s own website www.stadtorchester-ravensburg.de 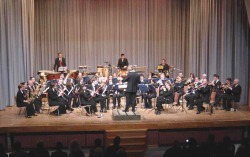 In 2006, a delegation from Nurtingen, led by Stadtkapelle President Eberhard Beck, visited Wales for the 2006 Welsh Brass Arts Festival, and at that event a firm twinning link between Craig and the Stadtkapelle Nurtingen was formed.

Further information on the Stadtkapelle can be found at their own website www.stadtkapelle-nuertingen.de