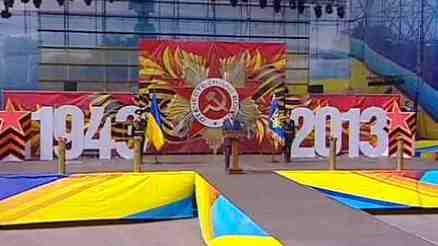 In August 2013, a 24 piece brass ensemble from Symphonic Brass Wales, directed by Craig Roberts, visited Kharkiv, Ukraine as guests of the Department of Culture of the Kharkiv Region.

The ensemble's visit was part of the 70th anniversary celebrations of the liberation of the Kharkiv from occupation in 1943.

SBW performed in a televised, grand scale ceremony in the presence of the Ukrainian President, Veterans of the Great Patriotic War (World War II) and other VIP guests, together with additional bands from across the Ukraine and other nations, including Russia, Moldova and Turkey.

The Welsh contingent also performed in an massed open event for the general public in Freedom Square, and gave a stand alone concert performance for people of the Chervonozavodsky region. Video footage of Symphonic Brass Wales performing for the President and people of Kharkiv can be found here 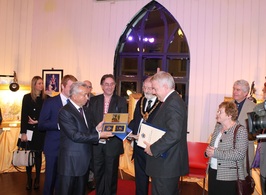 Courtesy of the Ministry of Foreign Affairs of Ukraine

The Ukrainian state flag was raised over the Cardiff harbor on November 13. It marked an opening of an art exhibition dedicated to the 200th anniversary of John Hughes, Welsh engineer and founder of city Donetsk. The event was organized by the Embassy of Ukraine to the United Kingdom.

First Minister of the Welsh Government Carwyn Jones, Mayor of Donetsk Olexander Luk'yanchenko, Mayor of Cardiff Derek Morgan, members of the National Assembly of Wales, Ambassador of Ukraine Volodymyr Khandogiy and representatives of the Ukrainian community attended the opening of the exhibition of Ms Tetyana Ponomarenko-Laverash, honored artist of Ukraine. The exhibition "Hughesovka. The future begins in the past", will be on display until November 17 at the Norwegian Church Arts Centre.

During the opening ceremony, Ambassador Khandogiy emphasised that, having invested his skills and inspiration in Ukraine Mr. John Hughes proved that advanced technology can bring great improvements, modernization and development despite political boundaries. "Thus, we can say that Ukraine’s advancement on the track of the European integration in its practical dimension has started a long time ago, in particular with the help of such pioneers as John Hughes", said the Ambassador.

In turn Carwyn Jones, First Minister of the Welsh Government, underlined the importance of such cultural projects for developing bilateral regional co-operation between Ukraine and Wales.

Welcoming the VIP-guests on behalf of the Donetsk City Administration Oleksandr Lukyanchenko stated that the name of John Hughes was remembered and respected in modern Donetsk. His innovative and creative approach to business serves as an example for the people of Donetsk today. On this occasion Oleksandr Lukyanchenko invited the guests to visit Donetsk next year and to participate in the celebrations dedicated to the commemoration of John Hughes’ bicentenary.

During the event the Mayor of Donetsk presented the picture "Hughesovka" by Tetyana Ponomarenko-Laverash to the city of Cardiff as a sign of friendship. This extraordinary piece of art was created with the help of children with disabilities.

The Mayor of Donetsk Oleksandr Lukyanchenko and Ambassador Volodymyr Khandogiy also laid a wreath to the monument of John Hughes in West Norwood in London. This monument has been restored with the financial support of Ukrainian businessman Rinat Akhmetov's Foundation «Development of Ukraine». The ceremony was held with the assistance of Bob Flanagan, President of the “Friends of West Norwood Cemetery” community.

A photogallery of the event in Cardiff can be found here 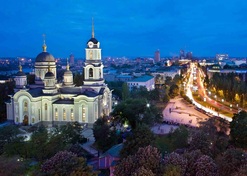 In the 1870's, John Hughes, an engineer from the South Wales industrial town of Merthyr Tydfil, travelled to Imperial Russia.

On the wide empty plains - the steppes - of southern Ukraine, he there set up an ironworks which developed into a huge industrial complex. Around the works grew up a town: Hughesovka.

In 1924, during Soviet times, it was renamed Stalino (Сталино), and in 1932 became the centre of the Donetsk region. Finally renamed Donetsk in 1961, the city today remains the centre for Ukraine's coal mining and notable steel industry centre. Donetsk currently has a population of over 982,000 inhabitants (2010) with a metropolitan area of over 2,000,000 inhabitants (2011).
UK & Ukraine Today

During the year of 2012 in comparison to the same period of 2011 the total volume of bilateral trade in goods and services between the United Kingdom and Ukraine has grown by 6% and amounted to almost 3.1 bil. USD.

Following the year of 2012 in comparison to the same period of 2011 the total volume of bilateral trade in goods between Ukraine and Great Britain increased by 5% and amounted to 1.7 bil. USD.

The volume of goods exported from Ukraine to Great Britain increased by 14% and reached 551 mil. USD. The volume of goods imported into Ukraine from Great Britain increased by 2% and reached 1.1 bil. USD. The trade balance of bilateral trade in goods during the year of 2012 caused a deficit for the Ukrainian side of 598 mil. USD compared to 643 mil. USD from 2011.

During 2012 the most exported types of goods from Ukraine to the United Kingdom were:

During the period of 2012 the most imported types of goods from Ukraine to United Kingdom were:

During the 2012 in comparison to the same period of 2011 the total volume of bilateral trade of services between Ukraine and the United Kingdom increased by 5% (120 mil. USD) and amounted to 1.4 bil. USD.

The volume of services exported from Ukraine to the United Kingdom increased by 2% and reached 724 mil. USD.

The volume of services imported into Ukraine from the United Kingdom increased by 8% and reached 699 mil. USD.

The trade balance of bilateral trade in goods and services during the period of 2012 caused a profit for the Ukrainian side of 25 mil. USD.

In terms of FDI in Ukrainian economy the Great Britain ranks 6th amongst 128 investor countries. During the 2012 British investments shrunk by 37 mil. USD. Most of the decrease happened in the sphere of real estate, engineering and catering that amounted to 110 mil. USD. The decrease in FDI to the companies involved in provision of financial services amounted to 108 mil. USD.

At the same time, amount of FDIs from the United Kingdom increased in the spheres of transportation and communications (by 128 mil. USD), retail, vehicle repair, household goods, and personal hygiene (by 53 mil. USD), chemicals manufacturing (7 mil. USD).

Therefore, as of 01.01.2013 the biggest share in total amount of British investments hold investments into the following economic activities:

As of 01.01.2009 Ukrainian nationals have invested 13.7 mil. USD into British economy, which amounts to 0.2% of all Ukrainian investment into foreign economies.

Most of the investments were made into financial activities – 13 687 mil. USD (during the year of 2008 this number fell by 72 thousand USD).

There are 4 companies registered in United Kingdom that contain Ukrainian investments.

As of 01.04.2012 the information about Ukrainian investments into economy of Great Britain was classified in accordance with the Ukrainian law “On government statistics”.