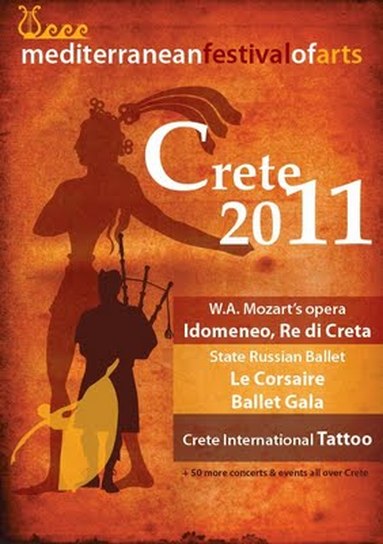 The 2011 Mediterranean International Festival of Arts was held on the Greek Island of Crete between 25 September and 5 October 2011. Following on from a large scale taster event hosted in the Cretan capital of Heraklion in 2010, the 2011 Festival was hosted across the whole breadth of the island of Crete, in a ten day long series of events featuring a host of high profile international artists from a variety of different nations and genres.

From the first ever performance upon the island on which is is set of the Mozart opera Idomeneo (Re di Creta - King of Crete), through to a Ballet Gala at the historic Fortezza, Rethymno featuring soloists from the renowned Bolshoi Ballet; the first concert ever staged in St Minas Cathedral, Heraklion; the Russian State Ballet company's production of Adolphe Adam's Le Corsaire; the Crete International Tattoo; concerts with West End musical theatre star Peter Karrie, accompanied by Symphonic Brass Wales & Just Harrie; recitals by leading medieval and renaissance artist Jordi Savall, Trio Mediterrae & the Volkonsky Consort; displays by world gymnastic club champions Club Piruett of Estonia; plus jazz & blues events by American artists, and additional Greek and international folk music performances, the Festival was a tremendous undertaking and a great artistic success.

Craig was Director of Music and Musical Advisor to the event, and thoroughly enjoyed working with the wide and colourful array of high class artists from the 14 different nations who featured in the event. In addition to each and every artist who contributed so significantly to the event, sincere thanks are also offered to the Cretan people for the generosity and hospitality they showed to all visiting perfomers, and to the Periphery of the Governor of Crete and the Municipalities of Heraklion, Rethymno, Agios Nikolaos and Hersonissos, plus the Festival sponsors - particularly Tez Tour and Versus - for their collective unfailing support throughout. We wish the Festival and all parties all the very best for the future