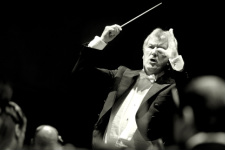 Camerata Wales was founded in 2005 by leading Welsh conductor Owain Arwel Hughes, with the core purpose of establishing a freelance orchestra of the highest international standard for Wales. To date the orchestra has performed in some of the country's most prestigious performance venues - including St David's Hall, Cardiff; the Brangwyn Hall, Swansea; Cadogan Hall, and, at the invitation of HRH The Prince of Wales, at St James's Palace, London.

The orchestra has undertaken a number of recordings with the internationally renowned classical label BIS Records of Sweden. These recordings have received excellent critical acclaim and continue to amass a great deal of broadcast airtime, including regularly on the leading UK national independent radio station Classic FM.

Camerata Wales remains thoroughly committed to the promotion and performance of primarily Welsh music, at the very highest level, across the whole of the Welsh nation and beyond. The orchestra was recently the recipient of a large award from the Arts Council of Wales, which supported "Penblwyddi / Anniversaries" a major digital media project focused on Welsh orchestral music.