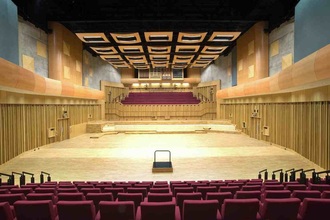 Led by the Royal Welsh College of Music & Drama, together with Welsh National Opera MAX, BBC National Orchestra of Wales and Making Music Wales, as part of the London 2012 Cultural Olympiad, the weekend of 3/4 March 2012 saw events taking place across the whole of the UK under the banner of Music Nation.

Music Nation Cymru was a celebration of live music across all of Wales, and brought together musicians of all levels, featuring music for and by young and old, and opportunities for everyone to join in. Featuring a host of high profile concerts at leading Welsh concert venues, the weekend was focused around three key participatory events.

BBC National Orchestra of Wales then also hosted the Music Marathon at Hoddinott Hall, where ensembles from across Wales featured at the home of BBC NOW for a full day of free concert performances. "Brass Tracks" featuring Abergavenny Borough Band and Just Harrie, conducted by Craig and BBC NOW's Nigel Seaman, was a central feature of the day.

Sunday March 4 then featured the National Cymanfa Ganu, led by Making Music Wales and Ty Cerdd, where musicians from across Wales joined together in a massed performance of traditional Welsh music at the Wales Millennium Centre. Additional ensembles across Wales also opened their own doors to their local community, inviting them to join their community ensembles in music and song, as part of a pan-Wales simultaneous performance that day.

Additional events included free and more formal performances at a range of venues across Cardiff and further afield in Wales, including Cardigan, Newport, Wrexham, Mold, Llandudno and Caernarfon. Further information on the BBC's Music Nation, which united orchestras, musical groups, choirs and concert halls all across the UK, can all be found in the Music Nation Cymru area of the Festival 2012 website.