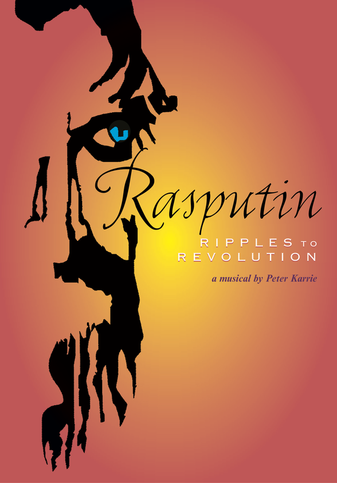 Rasputin, Ripples to Revolution, was a musical theatre project Craig managed for Making Music Wales in 2013.

The writer's note reads as follows...

"Rasputin was the doorway to today’s Russia. Whether by accident or design, without him being a peasant of the people, without him reaching the pinnacle of power... Without him being the way he was... No-one would have had the opportunity to see the glaring faults in the existing Royal family. Without Rasputin, the Bolshevik revolution might never have taken place at all (at least not at that time…).

History has depicted a Rasputin that was evil and of the devil. The truth is a very different story. He was not a saint by any means but he was also not the ‘Holy Devil’, as depicted by the political regime and press of the day. He wasn’t having an affair with the Tsarina. He had many problems in his life but that was not one of them. He was the ideal weapon to get the attention of the people. He was the perfect target for the paparazzi press and was always guaranteed to provide them with some form of anti royal propaganda. Which when used by The Guchkov press, hugely undermined and incited the naive people of Russia to rise up against Rasputin and the Romanov dynasty..."

Supported by a theatre development grant from the Arts Council of Wales, Rasputin was workshopped for three week long periods throughout 2013 at the Royal Welsh College of Music & Drama with Writer Peter Karrie, Director Angharad Lee, Musical Director Llyr Simon, Choreographer Phil Williams, Vivien Care and the MA Musical Theatre department of the Royal Welsh College of Music & Drama and a large team of professional actors.